Health workers are the beating heart of every health system and the majority – seventy percent worldwide – are women. Meet Noora, Zainab and Feriha, who deliver polio vaccine to communities against formidable odds.

Noora Awakar Mohammad was only sixteen years old when she started working as a volunteer for the Polio Programme in Somalia. Since then, she has lived through civil war and armed conflict in her country, which have left the health infrastructure in tatters. Recalling the days of war, Noora’s face tenses. “During the civil war years, on many occasions the polio campaign was stopped because of intense fighting. As soon as the fighting would stop, we would run to communities to vaccinate children,” she recalls.

During those days, it was mostly elderly women and mothers who trained as vaccinators. The adolescent Noora had to work hard to build community trust. “Often, I stayed with the community and vaccinated the children amidst war. The community trusted me even though I was a young health worker,” she remembers.

Noora still faces challenges in her fight against polio. Many areas in Somalia are unreachable because of the presence of non-state groups. These groups, who oppose vaccination, have been responsible for creating fear among parents by spreading misinformation. Noora has also encountered vaccine-hesitancy among parents because of inadequate health awareness. “I have seen fathers refusing to vaccinate their children on one hand, while mothers request us to vaccinate them on the other. Under such trying circumstances, we have to seek the help of religious leaders to convince the refusing fathers,” Noora explains.

Alongside polio vaccination, Noora works as a midwife. As part of her role, she educates pregnant women and young mothers about the benefits of vaccination. She also builds awareness of Acute Flaccid Paralysis (AFP) in the community, a key symptom of polio. “I share information about AFP with mothers and now I see more and more mothers bringing their children to health centers even with the slightest symptom of AFP,” Noora says.

Noora emphasizes that closing the current polio outbreak in her country remains tough given the climate of insecurity and inaccessibility, but she remains determined to carry on with her work.

Zainab Abdi Usman is a midwife in Madina district in Banadir state in central Somalia. For the last twenty years, she has volunteered for the polio eradication programme. A source of frustration for Zainab is the children missing out on vaccination in inaccessible areas. The barriers health workers face to access populations in desperate need of basic healthcare and community services are sometimes insurmountable.

“During the civil war, I used to carry the vaccine in a thermos kettle to keep it cold and I would hide it under my Abaya. If fighters got suspicious, they would not allow me to go into the communities to vaccinate the children. Today, many areas remain inaccessible,” Zainab says.

Whenever the access situation changes, the polio programme is amongst the first health initiatives to reach children. Zainab explains, “In a conflict situation, there is an immediate need to treat victims of the conflict. However, at the same time, it is important that we save our children from paralysis resulting from polio. Therefore, reaching out to children in insecure areas is very crucial in our fight against the disease.”

Feriha Abdur Rehman Yusuf is the young mother of a one-year old boy. She sees the fight against polio as personal and has been part of over 30 immunization campaigns in Somalia.

An incident from Feriha’s past stays with her years later. “One day, during a door-to-door campaign, I knocked at the door of a house. A man carrying a gun opened it. He yelled at me and started shooting in the air. I was shaken for days,” she remembers. Thankfully, the situation has changed in Feriha’s district since then.

Thanks to efforts to educate parents, the public is more aware of the long-term benefits of vaccination. However, Feriha still faces a few families who reject the polio vaccine during campaigns. She tries to convince parents using the examples of her own son, and her nephews and nieces. If families continue to be worried, she seeks help from religious leaders and community members.

Working during campaigns is not easy for Feriha now she has her son. Feriha says that her mother is the biggest supporter of her work and source of encouragement. “When I am in the field during the polio campaigns, my mother practically moves into my house and takes care of my child,” she says.

Feriha believes that despite the climate of insecurity and inaccessibility, things are improving in Somalia. “Health services are getting better than before. More and more children are getting vaccinated, so they have a better shot at life,” she says. 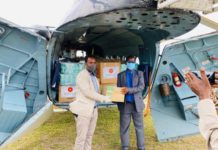 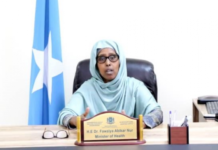