Somalia is defined as a failed state and many may merely relate this to the internal conflicts that has threatened the country for decades. Although internal political and social conflicts are considered to play a significant role, however, the instability is further aggravated by foreign interventions. Somalia has become a major geopolitical battleground for many countries because of its strategic location and with many countries competing to exploit its natural resources. The latter is particularly obvious considering the aggressive diplomatic approach of the United Arab Emirates (UAE) has taken in recent years.

UAE and Somalia share a long history which stretches back to ancient times. Bilateral relations, religious, trade and social ties have become even stronger following the UAE independent in1971. In addition, the personal friendship between the former President Barre and Sheikh Za’id Al Nahyan (the founder of the UAE) has made the two countries and people much closer. Every year indeed Sheikh Za’id used to spend his vacation time in his farm in Afgoi (Somalia). Both countries are also members of the Arab league. Because of the historical, trade, religious and
bilateral ties, the number of Somalis moving to UAE as well as other Gulf countries skyrocketed in the late 70’s and 80’s due to employment opportunities in these countries with many thousands still living in the UAE.

Following the collapse of the Somali regime in 1991, the UAE became the major hub for the Somali business. The proximity of the two countries has played a substantial role in boosting the bilateral trade. Dubai is considered as Somalia’s key link to the rest of the world and a major touristic destinations for Somali Diaspora.

It is comprehensible that UAE has security and economic interest in Somalia. President Mohamed Abdullahi “Farmajo” considers UAE as one of the key allies of Somalia and vows to maintain a stronger diplomatic relation. UAE continues to provide aid to Somalia, and train national army personnel, but many Somalis worry about its real motive as it has become part of the Somali conflict.

The UAE Ambassador to Somalia H.E. Mohamed Othman is seen by many as arrogant, and narrow minded. He continues to publically meddle to Somalia’s internal domestic affairs.Because of his lack of experience as a diplomat and his beliefs that he can buy any Somali politician with money, has made it difficult for him to present UAE as a better positioned ally to Somalia and to promote UAE agenda.

UAE interference to Somalia’s domestic affairs intensified following the Gulf crisis that erupted in June of this year when Saudi Arabia called on a number of countries, including Somalia, to join its boycott of Qatar. However, the Somali President Mohamed Abdullahi “Farmajo” has decided to stay neutral and has called for a brotherly resolution of the conflict. The objective of his decision was to avoid further escalation of the conflict as Somalia at this difficult time cannot afford to alienate key partners in the Gulf region. President “Farmajo” understood that the conflict is not in the best interest of the Gulf countries and if it continues it will spill over in Somalia and deteriorate further the security situation.

In response to the President’s decision, Ambassador Othman of UAE has openly declared a war against the Government by inviting several regional states President’s to denounce the government’s neutral stand. These regional Presidents have made trips to the UAE and met with the UAE political lobbyist, current senator and former PM of Somalia, Mr. Omar Abdirashid and in Dubai a plan of action against the Federal government was finalized. This plan consists of UAE providing money and resources necessary to mobilize parliamentarians and overthrow the government. The final goal is to create a political standstill, chaos and weaken President “Farmajo”. 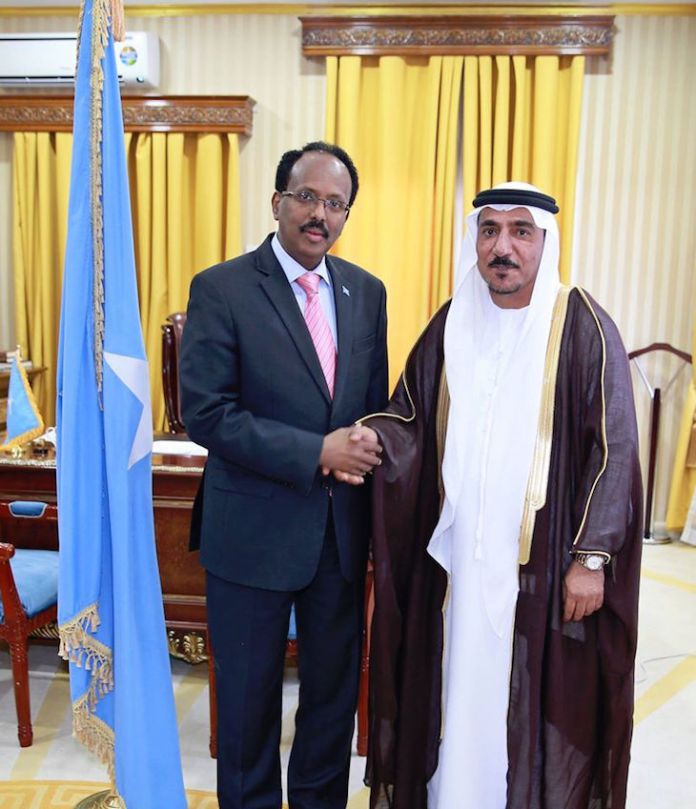 One needs to ask why all this? The answer is very simple; the UAE and its Ambassador feel that Somalia is week, divided and is a perfect time to choose and pick who will better serve their agenda. The biggest question is then who will benefit from such move? One needs to understand that whenever there is a political conflict, Al-Shabab emerges as a key winner.

Already in this month, exactly on October 14, Al-Shabab has orchestrated its deadliest attack ever in Mogadishu killing more than 500 people and on Saturday October 28 at least 25 people were killed in coordinated car bombings followed by an attack on a Nasa-Hablood 2 Hotel in Mogadishu. The government has set a priority to pacify Mogadishu and to use extraordinary measures to prevent al-Shabaab attacks, and has really made some progress, but because of the political crisis created by the UAE, maintaining security in Mogadishu has turned to be more challenging.

The current political polarization pursued by the UAE in Somalia is a threat to the stability and existence of Somalia as a nation. We must not fail to grasp the grave consequences of the UAE meddling in Somalia’s domestic affairs. Political instability is a significant limitation to the improvement of human conditions in Somalia.

Man-made droughts, and preventable diseases have worsened the conditions of our people in many parts of Somalia. International effort to persuade UAE to stay away from interfering Somalia has also failed.

What can Somalia do to mitigate this existential threat? It is not in the best interest of Somalia to disengage UAE. The UAE needs to understand that it has a big leverage over Somalia because it
is the de-facto business hub and a country where Somalis love to visit. It is a given that UAE will always have a priority over other countries.

The Somali government needs to highlight these natural bonds and to constantly engage the Emirates to be on their good side. The Government must also request UAE to replace their current Ambassador with a more experienced traditional diplomat; one who appreciates the historical and cultural ties of both countries. Unfortunately, the current Ambassador’s diplomatic approach towards Somalia is based on acting on rumors he obtains from certain Somali politicians. His actions translate to divide and conquer and it is really a recipe for defining UAE as an enemy of Somalia.

The worst mistake of Ambassador Mohamed Othman is exposing UAE as a greedy partner whose main goal is to make money regardless of the state of the country and the people of Somalia.

Somali’s by nature are friendlier people, and they might not like each other, but historically they are known to deeply unite against a common enemy. A diplomat stationed in a foreign country is expected to engage and impose diplomatic pressure to the government to better serve his/her country’s best interest. In the long-term UAE will not benefit from being seen as meddling in the domestic affairs of Somalia. The interest of the two countries will be better served by working together into a common goal of mutual understanding and strengthening further the historical, cultural and business ties.

The foreign policy of UAE towards Somalia seems to be determined by security and intelligence gathering, and politically they seem to be misled much by greedy Somali politicians who will do everything for money. If UAE wants to be a true partner, it needs to attract the minds and hearts of Somalis as is shown by the Turks. Its aid program must include economic development package.

President “Farmajo” needs to play a significant role in changing UAE’s current attitude towards the country. It will be a diplomatic mishap for both countries if the situation escalates further. It is time for a great diplomacy.